So I'm getting married. Those are words which I've practiced saying to myself for nearly 22 years. You ever notice how if you say a word long enough, it almost doesn't sound like a tangible dialect anymore? That's kind of the effect I get from those words. I've been thinking about the concept for so long that now that it's finally happening, I can't wrap my mind around it. I keep thinking the world could end at any moment because now that I'm about to achieve my life's goal, I don't know what comes nex; it was always sort of my end game. Game over… But not in an "oh crap I'm out of quarters" kind of way. It's more like beating a game you've spent the greater part of the year trying to accomplish, only to find yourself wandering around the house aimlessly trying to figure out what do next. I guess the answer is kids… And no doubt, that's my future as well, but how do I take all this in? 22 years of wishing, praying and even begging.

I remember my first crush. First grade. I walked in the room, looked around at all the other students and there she was. Megan L. Holy crap, it was like I had never met a member of the female race before. It was in that moment that I started thinking about the future. I was raised in a Christian home, the ideology was, you meet the girl of your dreams, you get married, you die, then you go to heaven. Life is simple when you're a young Christian boy. I still remember thinking her buck teeth were like Chicklets from heaven. See, while most boys were giving themselves Ye Olde "Circle, Circle, Dot, Dot" treatment, I was thinking up schemes to "rescue the princess"… Good Lord, there were so many Castles and she was constantly in another. What made that year even more interesting was this one girl, Rachel M., who used to chase me around the playground at recess and try kissing my hand. I was disgusted by her because I felt like a committed man (sad story is, she ended up being one of the hottest girls in High School. You win some, you lose some). It's how the majority of my crushes went from there on… One crush, one year, no other possibilities. I say one year because every school year you had a different class. I didn't see Megan again in frequency until High School when she was in my French Class. Kids get distracted easily, you go through phases of interest. One year I was into Batman Action Figures, the next it was Terminator, the next it was X-Men, and so on and so forth. It was the same with crushes… Sadly, this is a concept most men don't grow out of until they're in their 30s.

In any case, second grade rolled around and it was Rebecca M. Chasing castles was so last year, I was on to bigger and badder schemes. I remember having some of my friends chase her around the playground so that I could save her and be the hero. It kinda' worked… That is until one of those friends forgot the plan and pushed me over. Brian C… I was forced to improvise and modify my plan. Rather than continue the tough guy hero approach. I fell right over and lied there like I got hurt trying to save her. Her sympathy was mine! … Pathetic, I know. I'm not going to go through every crush I had. The point of all this is, my whole life has revolved around finding that special someone. Every year a new girl, every year a new disappointment. By my third crush, I encountered my first rejection. I finally built up enough nerve to ask out the girl of my dreams. It was 5th grade and her name was Sarah. My Lord, if she wasn't the most beautiful thing a kid could have laid eyes on. By the time I had built up enough nerve to ask her out (i.e. tell your best friend to tell her you like her), it turns out that 'friend' had already asked her out and she accepted. My first taste of the dreaded "Just Friends" speech.

From here on out it was rejection after rejection after a little more rejection. As this continued, the concept of marriage began to slip faintly into the realm of science fiction. Sure, a girlfriend here, a girlfriend there… Nothing solid, nothing permanent… Nothing even all that interesting. I'v been turned down, cheated on, toyed with… I've gotten the "friend speech" on a date before the appetizers even came out at dinner… And had to sit through the entire meal with her. Seriously, I'd like to see you TRY to get through a meal like that without ripping your nails out and gritting your teeth to a fine powder. Worst 45 minutes of my life. I loath you, Pollyanna.

If you're not getting the point yet, I'm trying to say finding love is a gauntlet of hurt… If you can make it through without finding yourself misogynistic, dead, or socially awkward, then you find something more rare and precious than anything today's culture can offer you. You see, I think people all too often give up, settle or try to out-devastate the opposite sex in some horribly twisted game of cat and mouse. The world tells you to conquer as many women as you can until your libido is ready to settle down and admit defeat. At the end of that road is little more than two tired, worn out people with too much baggage to settle down with each other. It's why so many don't even bother to unpack. It's easier to visit and hit the road again.

I'm happy that my relationships were few and far between… I feel like I have more to give. Despite how hard it was to see that light at the end of the tunnel, I kept running towards it. That light is mere days away from me and I can't even sleep I'm so excited. That's why it's 6:13 in the morning and I've been up for over an hour. Do I wish this could have come sooner? Absolutely… But I'm grateful it didn't. Through all the rejection and hurt, I came to appreciate what it is to be with someone who truly loves you as much as you've been yearning to love them. Had we found each other sooner, I may have taken it for granite and ultimately ruined the whole thing. Truth be told I'm happier than I've ever been in my life… And after two years with this woman I can safely conclude it's not the hype of a new relationship, or the captivation of laying my eyes on a beautiful woman for the first time.

Rachael, it's like you've replenished my faith in a heart's single desire to catch the ear of God and grant a miracle. You excite me now just as you did when we first laughed together in Portland, Maine. I haven't stopped laughing with you since and I plan to laugh with you through all of life's comedy. I love you to the point of insomnia and I hope I don't sleep through a single moment with you. 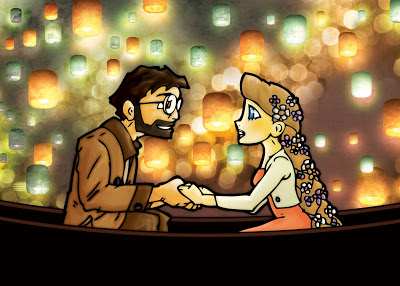 So much closer,
~ Mark