A while back I illustrated a couple of characters from the indie game Morphite, by Crescent Moon Games. In a nutshell, the game is really good. You basically fly around the galaxy exploring planets, scanning wildlife, fighting hostiles and learning about the secrets of a mysterious element named Morphite. Think of No Man’s Sky only if everybody had loved it.

The publisher enjoyed my illustration enough to reach out to me and suggest working on a game together… My wife and I began squealing like little girls. My wife is the greatest - While I was flattered by the offer, I didn’t expect it to go anywhere because in my cynical view of the world, offers like this tend to be more akin to telling your high school friends that you’re going to call each other everyday when you go to college. However, my wife encouraged me to keep my hopes up and keep the conversation going in any way that I could. That conversation progressed into something awesome… 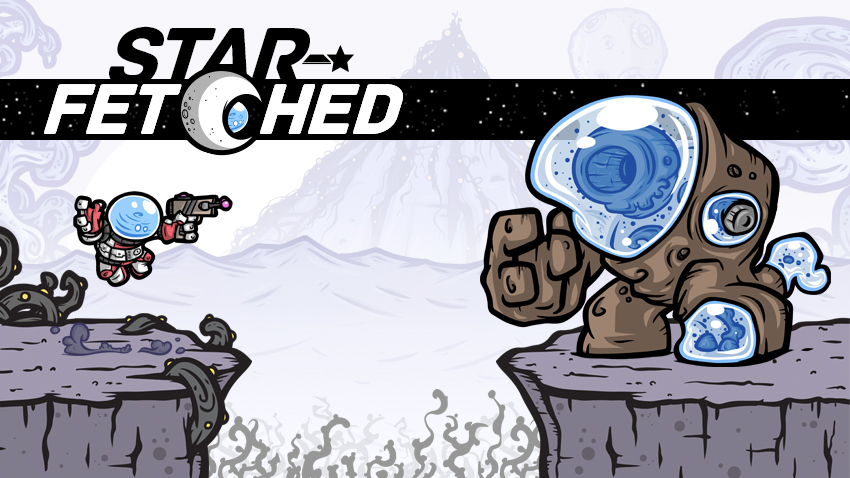 As of late last year, I’ve been working with Crescent Moon Games to create this beast of a game which we’re calling Star-Fetched. The general premise, without giving too much away, is that a young space adventurer named Rhys Randall has just returned home from a prior mission and is abruptly teleported to a far away planet to save a solar system from an oncoming alien invasion. It’ll be a 2D platformer with a heavy emphasis on exploration and crafting - and the artwork will be provided by yours truly.

WHY THIS IS A BIG DEAL
People make games all the time. I, on the other hand, attempt it about twice a year and typically get nowhere. It’s frustrating. My talent is art, not development (as you can tell by this slow-running, stitched-together excuse of a website). The part about gaming that I enjoy is the creativity and the art/graphics, not so much the work that goes into making those ideas playable. I now find myself teamed up with a legit indie game publisher, a talented developer and a phenomenal animator who will bring my creations to life. It’s literally the best case scenario.

When I say ‘legit game publisher’, I mean that Crescent Moon is one of 3 publishers, in my opinion, whose quality is all but guaranteed when you see one of their releases. The other two publishers being Orange Pixel and Ravenous Games. As I had stated before, Morphite is a really good game, one of my modern favorites, so to have the opportunity to work with the man behind the scenes of that title is exciting to say the least.

WHY STAR-FETCHED?
If you’ve followed this site or if you just happen to know me, you’re aware of one or two other games I’ve attempted to create in the past. One being the Mortal Kombat love letter, Son’Uva, the other being Pro Rock Paper Scissors - a homage to both 80s wrestling and complete and utter absurdity. There have been others sprinkled in as well, such as Turble. So why Star-Fetched? Simply put, there was no way on earth I was proposing any of those ridiculous games to an actual publisher. They’re passions of mine, sure, but I know when something sounds silly or amateur.

No, actually Star-Fetched was Crescent Moon’s idea. At the time I was working on a graphic novel about a kid who flies his cardboard spaceship to a peculiar star to see what it is (based on the lullaby Twinkle, Twinkle, Little Star). I had about 5 or 6 pages finished and had been posting them on my Twitter when Josh (of Crescent Moon) saw them and suggested using them as a concept for the game. The lightbulb in my head flickered and here we are. 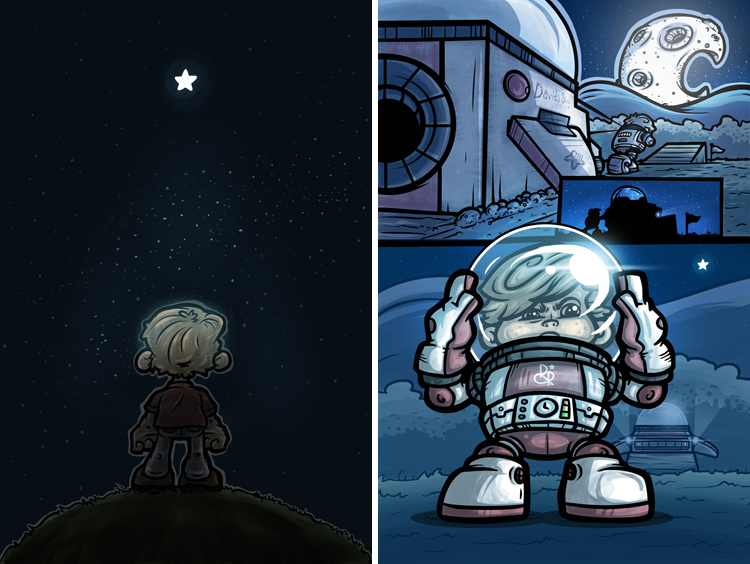 BEGINNING...
I didn’t want to waste any time and risk losing Josh’s interest in working with me, so I quickly wrote out a rough draft of how a game based on that comic could work. I had to change a lot about the story because it didn’t translate at all to a video game. I sent it to Josh and while he liked the general idea, it clearly needed some serious tweaking. He suggested it be more about an alien galaxy and Rhys defending the planets from hostile invaders. Much more video-game friendly. So I scrapped the idea of it being based on the story I was writing and began thinking of it as more of a sequel to an established hero. The pieces began to fit into place and the brainstorming thereafter lead to some great ideas.

FUN...
Now the fun began. Creatures! Having already designed our hero, I quickly began creating enemies for him to encounter on the worlds he’d be exploring. I grew very fond of this process because for the last x amount of years I’d given up creativity in favor of fan art. A man can only draw the X-Men so many times. It was part of the reason I had begun working on my graphic novel in the first place, to get out of the rut of drawing other people’s creations. To get the juices flowing, I began looking through old sketches and artwork I had done back when I was creatively independent. There were a lot of designs that deserved to be fleshed out and given proper attention to. Once I updated my old designs, my brain started functioning again and I was finally able to create some new characters.

INFLORIA
Not everything you illustrate can be a good time. Being the lead artist on a game means you have to do more than character design - those characters need to exist somewhere. Enter scenery - my arch-nemesis. Just like I had to dust off the creative side of my brain, I also needed to develop some of the other less-functional parts as well. Again I looked to some older work and found a few gems - though they were more or less the seeds to something potentially creative. Long story short, I worked at it and cranked out a location that I’m currently naming the planet of ‘Infloria’. It’s a dead, rocky, purple world that’s seemingly infected by a strange weed-like plant. We had been calling it ‘The Vine Planet’ (although, as somebody on the Twitter pointed out, it was more of a root than a vine - psh, whatever, that’s just semantics) and I wanted it to have a name. So I named it Infloria. Nobody has complained yet so I’m hoping that means it’s tolerable.

Because this planet has been the focal point of the work so far, I began designing enemies that fit in more with the terrain. My favorite has been this little guy that I’m calling the Vine Scamp.

I love him and I want one.

You’ll notice the above image is an animation example. What has been both fun and annoyingly challenging has been having to to take my designs and slice them up into posable layers. When someone like me says they have a ‘style’, it’s really just code for having a fancy way to hide their lack of knowledge on anatomy… I never paid attention during the nude model days in college because tee-hee. It was a struggle to take my designs and then explain how they move because a lot of the time their limbs made no sense in the real world.

I’m working on it!

Luckily we’re working with an insanely talented animator who actually has magical powers. He’s made of pure magic. He makes my creations move like something out of Fantasia.

THE FUTURE...
So what’s next? I honestly have no idea. It’s very possible this game gets finished and it makes me weep tears of joy. It’s also very possible that it doesn't go anywhere - Games get canned, it happens. I’m just trying to stay motivated, positive and useful.

Here’s what I do know - I’m working with a Publisher who 10 times out of 10 releases good games. We’re working with a developer who knows his stuff and can make this game SING. At the moment I’m fairly confident in my own talents as an artist and there’s an actual magical wizard making my designs come to life. All those ingredients keep me feeling positive that Star-Fetched is going to be something to brag about… And even if it doesn’t happen, I’m enjoying the process and I’m getting to know people I never would have met had this not happened. I feel blessed either way - I’m freaking working with Crescent Moon Games for crying out loud!

Oh screw it - I’ll spill the beans and leak the gameplay footage. Get ready to be blown away by graphical advancements your brain can’t even process and gameplay so fluid you’ll swear you’re actually swimming on the martian lakes of Infloria itself!

But in all seriousness, if you're reading this Josh, I appreciate the opportunity you're giving me with this project. Wherever this goes, it's a huge honor to get to work on something with the Crescent Moon name attached and for what it's worth, I'm having a blast.